No Yes
Permafrost-preserved Wooly Mammoth, from which tissues used in this study were collected. Yuka1

A collaborative research group* led by Kindai University (Kinokawa City, Wakayama Prefecture) has succeeded in observing biological activity in cell nuclei collected from a 28,000-year-old fossil of the Siberian mammoth "Yuka", found in permafrost. The mammoth cell nuclei from the fossil was transplanted into mouse oocytes; a method of nuclear transfer that is used for producing cloned animals. After nuclear transfer, mouse proteins were loaded onto the mammoth cell nucleus and a part of the mammoth cell nucleus started to form a new nucleus-like structure. These events are often observed when animals are cloned using this method, and therefore our study shows that the 28,000-year-old fossils still possess at least partially active nuclei. The results of this research will be published in the online international scientific journal, "Scientific Reports", on March 11th, 2019, at 10am (UK time).

-We have, for the first time, succeeded in observing the reconstruction of cell nuclei collected from mammoth fossils inside living mouse oocytes.

-Mammoth’s cell nuclei were found to have retained biological activity for 28,000 years in permafrost.

Cell nuclei contain DNA which is the design drawing of life, and its function is the root of biological activity. However, it has not been known whether cell nuclei collected from fossils retain biological functionality. In this study, we obtained bone marrow and muscle tissue from the body of a mammoth named "Yuka" found in Siberian permafrost (Fig. 1), and attempted to decipher various biological information from Yuka, and to restore cell nuclear function.

First, we compared the genetic information of "Yuka" with African elephants and confirmed the characteristic single base substitution and amino acid substitution possessed by mammoths. Next, mass spectroscopy analysis of the protein preservation state showed that the muscle tissue of "Yuka" was preserved in a relatively good state and the components of the cell nucleus were present. Therefore, we extracted mammoth cell nuclei from the muscle tissue, injected them into the mouse oocytes using a micromanipulator, and observed the reaction after nuclear transfer using a disc type confocal laser microscope.

This resulted in some mammoth cell nuclei beginning to take up mouse cell nuclear proteins in the mouse oocytes, and cells shaped as those do before division were observed. Furthermore, a part of the mammoth nuclei started to form a partial nucleus-like structure, and this newly formed structure was eventually incorporated into the cell nucleus of the mouse oocyte.

This research is a pioneering achievement that demonstrates for the first time in the world that some well-preserved mammoth fossils retain cell nuclei that can be reconstituted in the currently living embryos.

*An online international British journal for natural and clinical sciences

Creatures that have become extinct have genetic information about the mechanisms of evolution and valuable information about the main causes of extinction. Woolly mammoth (Mammuthus primigenius), found in permafrost is one of the most notable animals, and has had its whole genome information decoded, resulting in the reconstruction of mammoth haemoglobin (needed for its adaptation to the cold environment) and temperature sensitive TRP channels.

Kindai University has collaborated on research into mammoths with scientists in Sakha Republic - located in the northeast of Siberia in Russia - for approximately 20 years. In this research, using the latest biological information analysis technology, somatic cell nuclear transfer technology and live cell imaging technology, we attempted to analyze the biological information, and to evaluate the biological activity of cell nuclei derived from "Yuka", discovered in 2012.

There were about 27 million single base substitutions in Yuka’s genetic information compared with the African elephant, the comparison resulted in the discovery of characteristic amino acid substitution only found in mammoth.

Using a high-performance mass spectrometer (TripleTOF type), we analyzed proteins obtained from mammoth samples and succeeded in identifying 869 types of proteins, a number that greatly exceeds previous records. The identified protein contained many proteins in the nucleus such as histones and lamin, indicating that muscle/bone marrow tissues retained components constituting cell nuclei. Furthermore, by examining the degree of the deamidation state in the amino acid sequence of collagen, it was shown that the muscle tissue in Yuka’s sample was in a better preserved state.

5. Evaluation of the damage to the mammoth DNA

Using phosphorylated γH2A.X as an indicator, we developed a new method to evaluate DNA damage. Although the mammoths’ DNA was remarkably damaged, the damaged part of the DNA was repaired by the exceptional DNA repair ability of the mouse oocyte.

This study revealed for the first time in the world that the cell nuclei of mammoth have maintained its biological activity for 28,000 years inside permafrost, and it has also been revealed that the damage to genomic DNA can be partially repaired using the aiblity of mouse oocyte. As a result, DNA replication, gene transcription, translation and embryonic development of ancient creatures may be possible if the obtained cell nuclei have mildly damaged genomic DNA and a good preservation state. In the future, by utilizing Kindai University’s "Bioassay Platform" - using bioinformatics science and nuclear transfer that integrates state-of-the-art knowledge and technology - the reproduction of cellular level phenomena of extinct creatures may be possible. We expect to establish new research paradigms for palaeontology and evolutionary biology. 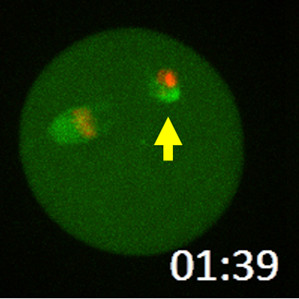