Permeation Mechanism of Water through Polymeric Membrane; Clarified for the First Time in the World Expectations for Development of Membranes with Functions, Such As Seawater Desalination - Kindai University

Associate Professor Noriyoshi Arai and his research group at the Mechanical Engineering Department at the Faculty of Science and Engineering of Kindai University have elucidated the mechanism of permeation through polymeric membranes.

The findings of this research will be featured in the Journal of Membrane Science - an international scientific journal with a significant global influence, on October 15, 2018 (Monday) at 8:00 AM (JST).

[Key aspects of this study]
- In a world first, the mechanism of water permeation through polymeric membranes has been elucidated.
- Designing molecules for controlling water permeation through polymeric membranes based on this mechanism has been proposed.
- Once the universality of the permeation mechanism is verified for fluids other than water, this research can contribute to desalination of sea water or selective isolation of greenhouse gases, leading to solving problems of a global scale.

[Overview of the study]
Materials such as plastics and rubbers that are everywhere in our daily lives are made of polymers. Polymers are molecules that are made of a large number of atoms that are linked and form strings. These become intertwined leading to them having properties that are different from compounds with low molecular weights (such as water molecules). Among polymer materials, polymeric membranes in particular are used for a variety of technologies, such as isolation and recovery of carbon dioxide (a greenhouse gas) as well as for fuel cells and thermal storage media. Much knowledge has been accumulated through the years from studies on the permeability of substances through polymeric membranes. Much knowledge about permeability of water is also included in those studies, but until now no decisive mechanism to freely control water permeability though polymeric membranes has been elucidated.

The research team used molecular simulations to discover that water creates special structures on the surface of polymeric membranes, and this was understood to be closely related to water permeability. As a result of this, whether or not additives are present and the affinity of additives with polymers was examined, leading to the discovery that water permeability is controllable. With this mechanism, the development of membranes that can lead to technologies that could not be realized in the past, such as regulating the permeation of molecules or not allowing any water molecules to pass through and the like, is expected to be a possibility in the future.

[Background and details of study]
There are high expectations for the membrane separation method that uses polymeric membranes, since it is considered one energy saving and clean method among available carbon dioxide isolation and recovery technologies. In addition to global warming, the rapid increase of population among developing nations has led to the depletion of water resources to reach critical levels, particularly in dry regions.

Securing water resources is essential for mankind to sustain abundant life, and new technologies relating to the desalination of sea water or the purification of water by using polymeric membranes are being researched to deal with such issues. Selectively permeating membranes made of polymers, therefore, is an essential technology for sustaining our abundant life - for isolating gas and petroleum, desalinating sea water, and purifying water, etc., while at the same time developing this mechanism can potentially lead to technological innovations, such as fully automated gas isolation membranes or ultra-high speed desalination, etc.

Gaining understanding about mass transfer phenomenon within polymeric membranes is crucial in order to achieve such highly functional selectively permeating membranes and as a result, there are an abundance of designs conceived based on the functions of living organisms, which are referred to as biomimetics (mimicking living organisms). Cells in our bodies, for instance, are covered by biomembranes and water is exchanged from within the cells and the outside through such membranes. In other words, biomembranes are selectively permeating membranes with regards to water and control the exchange of water between the interior and exterior of membranes. Past researchers learned from this, and it has been reported that arranging carbon nanotubes inside membranes can create a high-speed flow of water. The decisive mechanism for freely controlling permeation through membranes, however, has not been elucidated as of yet, and what have thus far been shown are simply limited potentials only. This research used molecular simulation to directly observe materials that permeate into membranes and made clear the factors that govern permeation through membranes, as well as their mechanisms. Such clarified mechanisms were taken into consideration in investigating what kind of polymers can be synthesized to bring about an impact on water permeation, and a strategy to synthesize such substances is proposed.

[Future outlook]
The "clarification of mechanism for controlling water permeation", which became evident through this research, will provide significant contributions to engineering technologies, through further improvements brought about by creating technologies for permeating only water, or conversely, disallowing permeation of water only, as well as applications of respective technologies that can lead to the development of next-generation displays and solar batteries. Furthermore, once universality of permeation mechanisms for matters other than water can be verified, massive contributions can be expected - from desalination of sea water, selective isolation of greenhouse gases and the like - which in turn can become an important key in solving problems of a global scale, such as water resource depletion or environmental problems. 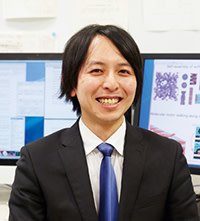 Asso. Prof. Arai is engaged in a broad range of research using molecular simulations, from fuel cells to the origins of life. This research is the result of joint research conducted in collaboration with Dr. Touru Kawaguchi and Takashi Kaneko (Advanced Research and Innovation Center, DENSO Corporation). 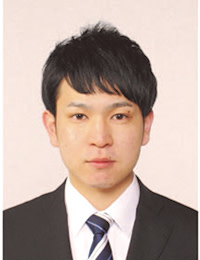 Yusuke Araki
Mr Araki graduated in March 2017 from the Mechanical Engineering Course at the Department of Mechanical Engineering in the Faculty of Science and Engineering at Kindai University.
He is majoring in Mechanical Engineering at Graduate School of Science and Engineering Research at Kindai University, and is expected to graduate in March 2019 from the Master's Degree Program. His academic degree thesis is the "Self-assembling Structure of Triblock Polymer Model with Molecular Recognition Function Using Dissipative Particle Dynamics Approach".
He has presented research papers at two domestic conferences and three international conferences. His research topic of this article will be featured with him as the primary author in 2018. Another research topic has been submitted to an academic journal, which is currently being reviewed. He is currently a second-year student majoring in mechanical engineering at the Graduate School of Science and Engineering Research at Kindai University. 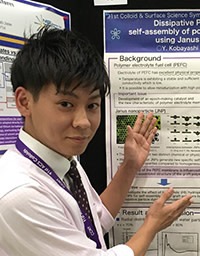 Yusei Kobayashi
Mr Kobayashi graduated in March 2016 from the Intelligent Machinery System Course at the Department of Mechanical Engineering in the Faculty of Science and Engineering at Kindai University.
He has majored in Mechanics Systems Engineering at Graduate School of Science and Engineering Research at Kindai University and graduated in March 2018 from the Master's Degree Program. His academic degree thesis was the "Intratubular Flow of Janus Nanoparticle Aqueous Solutions and Self-assembling Research Using Dissipative Particle Dynamics Approach".
He has had eight research papers published to academic journals, and presented at 11 international conferences. He was awarded the Miura Award from the Japan Society of Mechanical Engineers in March 2018, and the Student Presentation Award at the 6th International Symposium on Micro and Nano Technology held in Hakata District of Fukuoka Prefecture in March 2017. He is currently spending the first year of his Ph.D. program as JSPS (Japan Society for the Promotion of Science) research fellowship for young scientists (DC1).