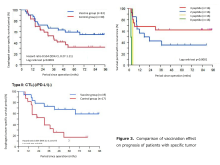 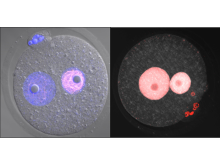 This research is expected to contribute to the development of reproductive medicine, including human infertility treatment, and animal breeding technology through practical application of the special characteristics of fertilized eggs that were discovered. 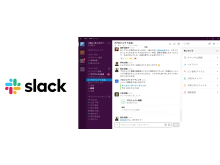 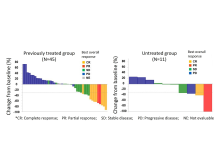 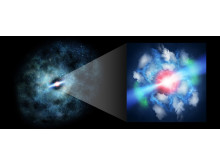 Astronomers obtained the first resolved image of disturbed gaseous clouds in a galaxy 11 billion light years away by using ALMA. The team found that the disruption is caused by young powerful jets ejected from a supermassive black hole residing at the center of the host galaxy. This result will cast light on the mystery of the evolutionary process of galaxies in the early Universe. 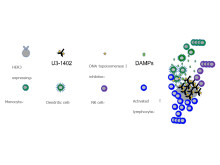 The research team from Kindai University's Faculty of Medicine, in cooperation with DAIICHI SANKYO COMPANY, LIMITED, have verified at the preclinical stage that using the currently under-development anti-cancer drug, U3-1402*1, in combination with immune checkpoint inhibitors*2 has the potential to be an effective treatment. 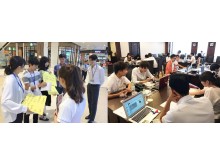 Kindai University and Teikyo University have cooperated on an overseas internship program in Ho Chi Minh City in Vietnam. Students worked on developing new markets for "Gokiburi Hoi Hoi" (Earth Cooperation) through a problem solving project-based learning program. After returning to Japan, the students will give a presentation of their marketing strategies to the CEO of Earth Cooperation.

In a world first, the treatment has been proven to be nearly twice as effective at prolonging life as the current standard treatment, TACE (which was created in the 1970s). Further, it is an extremely effective treatment method for the disease, with the study showing just under 20% of patients experienced complete elimination of the cancer and are still living to date without any treatment. This clinical study was collaborative -research carried out between 2008 and 2018 cross-institutionally, with a total of eight -institutions (see below for details); seven domestic and one in Hong Kong. As per this announcement, these results change the face of the medical care world, with the development and establishment of a treatment for a previously incurable disease with no standard treatment.

- Positioned to be the new standard treatment for liver cancer which reaches the intractable stage.

In this study, the molecular targeted drug, lenvatinib, which is usually used only for advanced liver cancer, was first used as the initial therapy for this stage of liver cancer. By using this treatment, the following hypothesis was proven to be true:

4) By using TACE at the time which the molecular targeted drug exerts its maximum effect, recurrence and metastasis is prevented by suppression of angiogenic factors (factors that cause tumor growth / invasive metastasis) induced by the TACE.

Further, by administering the molecular targeted drug, lenvatinib, to patients of this stage of liver cancer, and following it up by adding TACE (combined LEN-TACE sequential treatment), compared to just using TACE, life was prolonged by approximately double. In addition, it was found that the risk of death was reduced by approximately 52% (HR*4 0.48, p<0.01).

As it has been proven to prolong life, it is foreseen that this new treatment will significantly change the treatment strategy of liver cancer globally, and become the standard of care.

Research paper title: Lenvatinib as an Initial Treatment in Patients with Intermediate-

The molecular targeted drug lenvatinib has, in the 10 years to 2017, been shown to be the first drug to be non-inferior to the only standard drug, sorafenib for advanced HCC until now, in prolonging life. The details of the results of the clinical trial were published in ‘Lancet’ in 2018 (Kudo M, et al. Lancet 2018). Currently this drug is approved worldwide as the first choice of drug for advanced liver cancer, of course in Asia, but also in the Americas and Europe etc., and therefore its use is widespread. Further, lenvatinib not only showed greater effectiveness in prolonging life in advanced liver cancer patients, but also excelled for tumor reduction and necrosis; objective response rate (ORR*5) was 40.6%, indicating excellent effectiveness as an anti-tumor agent. Conversely, TACE, the standard treatment for intermediate-stage liver cancer just before the advanced stage (multiple nodules/large-sized cancers without vascular invasion/extrahepatic metastasis) has poor effectiveness, with reoccurrence of cancers leading to liver function worsening and accelerating death; many cases of patients becoming terminally ill or progressing to more advanced stages of liver cancer even after treatment with TACE have been seen. This stage of the disease can be said to be an illness that causes suffering worldwide, with no standard treatment, it is an incurable cancer.

Prof. Kudo and his team focused on the superior tumor reduction and necrosis effectiveness of lenvatinib. Lenvatinib was purposely pre-administered before TACE treatment at the stage of multiple nodules/large-sized cancers, without the presence of vascular invasion/extrahepatic metastasis, and then TACE was performed. The hypothesis that pre-administration of lenvatinib, followed by TACE, (LEN-TACE sequential treatment), would enhance the effectiveness of the TACE was stated. At the time there were few researchers around the world with such a hypothesis. To verify this hypothesis, between 2008 and 2018, the research team analyzed 37 patients at this stage of liver cancer, administering lenvatinib as an initial treatment. The methodology used was a comparison of the treatment effectiveness with 139 patients who had TACE carried out during the same period. Further, the results of propensity score matching*6, a statistical method to unify the backgrounds of patients was used; 30 cases of lenvatinib pre-administration followed by TACE and 60 cases of only TACE therapy were extracted, with comparisons made between objective response rate (ORR), progression of liver function deterioration (ALBI score*7), progression-free survival (PFS*8), and overall survival (OS*9).

The results showed the group who were pre-administered lenvatinib had a much higher ORR of 73.3%, compared to 33.3% for the group who had only TACE (Odds ratio 5.29, <0.001), deterioration of liver function was also significantly lower (p<0.01), further, PFS was dramatically better in the lenvatinib pre-administered group (16mths vs 3mths, hazard ratio 0.19, p<0.001). In addition, there were four patients in the lenvatinib pre-administration group that experienced complete disappearance of all cancers and were completely cured, with follow up observations showing they were healthy with no treatment. Therefore, this treatment is considered to be a groundbreaking new cure, even for some advanced liver cancers (multiple nodules/large sized cancers). These results mark the announcement of the development of a ground-breaking world first, and will change medical treatment strategy globally by providing a treatment where no prior standard existed.

Different from previous anticancer drugs that also cause harm to normal functioning cells, molecular targeted drugs are drugs that only target the specific molecules that are involved in proliferation of cancer cells and suppress their activity. In the case of liver cancer, approved medicines include the following four: lenvatinib (Lenvima), sorafenib (Nexavar), regorafenib (Stivarga) and ramucirumab (Cyramza).

The liver gains nourishment through two blood vessels; the hepatic artery and the portal vein. As liver cancer cells gain nutrition and 100% of their oxygen from the hepatic artery, TACE is a method of using a catheter to completely block the hepatic artery, thus killing the cancer cells. If the size or number of cancers is small, this method is effective, but if the cancer size is large or numerous, the disadvantages of this method are, as well as it being difficult to have the catheter close to the tumor, it also to an extent kills the surrounding normally-functioning cells, decreasing liver function.

When cancer forms in a living organism, lymphocytes should be activated to attack the cancer cells to try to kill them. However, when this reaction occurs, cancer cells release a molecule called PD-L1, and by binding this molecule to the PD-1 on the surface of lymphocytes, they are able to evade immune cell attack, successively proliferate and spread to and invade other locations. When antibodies that bind to PD-1 or PD-L1 are administered, the cancer cells’ avoidance mechanism (against the immune response) is blocked, and lymphocytes can again attack the cancer cells. This mechanism was discovered by Prof. Honjo of Kyoto University in 2018 and he was awarded a Nobel Prize in the field of Physiology or Medicine.

“Hazard Ratio” is a term used in statistics, it is used to describe a method used to objectively compare the relative degree of risk in clinical trials. It can be abbreviated to HR.

When investigating a new treatment, HR is used to compare it to the standard treatment. A hazard ratio of 1 shows that the two treatment methods are not different. Less than 1 shows that the new treatment is more effective than the standard treatment, with the lower the number showing greater effectiveness. For example, if a clinical study comparing the effectiveness of medicine A to medicine B results in 0.94, medicine A is deemed to have reduced the risk by 6% compared to medicine B. The HR of OS in this clinical study was 0.48, therefore it can be stated that the new treatment method reduces the risk by 52% of death.

A commonly used standard indicator to evaluate the results of treatment using anticancer drugs, by comparing the size of the tumor before and after treatment. Tumor reduction (or necrosis of tumor) of 30% or more is deemed to be ‘partial response’ (PR), and 100% complete disappearance or complete necrosis of the tumor is called ‘complete response’ (CR). The efficacy is measured by adding the CR and PR of the whole mass, with a higher number corresponding to greater efficacy.

A method of statistically proving clinical usefulness. In order to prove that hypothesis (e.g. A treatment method is better than the standard one) is of the highest importance, a prospective randomized control trial (RCT) is the method with the highest level of evidence. However, the method with the next highest level of evidence is this one, created in 1983. That is, it is a statistical analysis method recommended in recent years as a so-called “method for eliminating selection bias” by making uniform the extraneous factors related to the survival to both groups.

Conventionally, Child-Pugh Classification and Child-Pugh Score have been used as indicators of hepatic functional reserve. ALBI Score is a more accurate and objective indicator than Child-Pugh Classification as it is calculated using only albumin and bilirubin. In recentyears, ALBI Score has become more commonly used than Child-Pugh Score. It has also been adopted into the protocols of the Liver Cancer Study Group of Japan. Although the calculations are complex, most hospitals have adopted systems that automatically calculate the value and display them to electronic medical records, making the process extremely simple.

A commonly used indicator used for the evaluation of the results of treatments of anticancer drugs. It is defined as the period from beginning a study or treatment start date to confirmation of disease progression or death. Often the median is used as the representative figure.

A commonly used indicator used for the evaluation of the results of treatments of anticancer drugs. It is defined as the time from the registration date of the study or treatment start date of the target patient, to confirmation of death. Often the median is used as the representative figure.

Senior Administrator Masatoshi Kudo of Kindai University Faculty of Medicine, Department of Gastroenterology and Hepatology, with his research group has invented a new method (LEN-TACE) of treating patients with intractable multinodular or large liver cancers, particularly those with near advanced liver cancer. 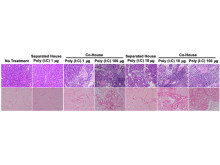 Kindai University have discovered, for the first time in the world, a deep link between changes in the maintained balance of accumulated co-existing intestinal flora (bacteria) and immune responses in patients with chronic disease of the pancreas caused by autoimmune pancreatitis. This paper will be published online at midnight Japan time, July 10th, 2019, in “International Immunology”. 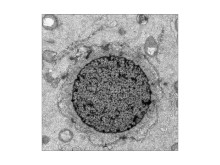 A Research group comprised of Kindai University’s Faculty of Biology-oriented Science and Technology , the National Institute of Information and Communications Technology and Osaka University have focused their attention on the building blocks of life, DNA, and in a world first, the group has artificially created cell nuclei structures in living mouse fertilized eggs.